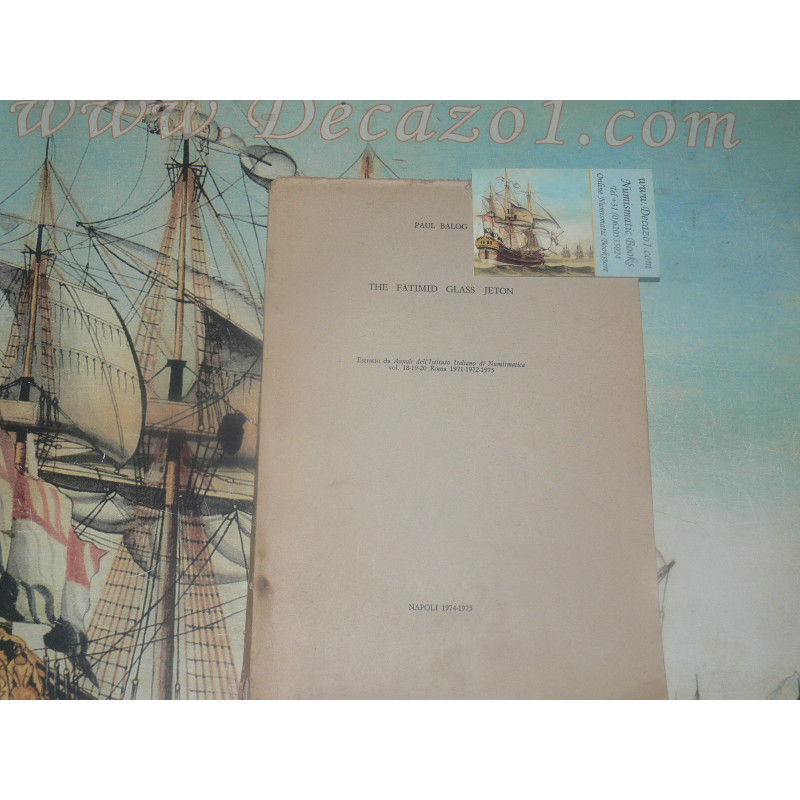 The Fatimid Glass Jetons and their use

With dedication of Paul Balog to a well known Dutch numatist on cover. Rare.

Selection of articles on numismatics by Paul Balog, The Fatimid Glass Jeton, Parts 1 and 2. The description of 435 glass jetons from the Fatimid dynasty in Egypt. The catalogue follows an introductory section explaining the history of study of these glass pieces, a discussion of their probably use in Fatimid society, and an explanation as to why they are so abundant. Many of the pieces are photographed in 11 + 18 high quality plates.

THE FUNCTION OF FATIMID AND AYYUBID GLASS WEIGHTS

When European scholars in the late eighteenth century first noticed small, round, flat glass objects with Arabic inscriptions on one or both sides, it is not surprising that they tended to regard them as some sort of coin.  E. T. Rogers who first, in 1873, convinced scholars that these objects were coin weights.

Most recently, the late Marcel Jungfleisch and Paul Balog, leading students of the subject, have argued that the later Fatimid and Ayyfibid "jetons", as they prefer to call them, were used as official fiduciary (token) currency from the late 1oth until at least the 3th century, to serve as small change in a period when copper coinage was non-existent and silver was seemingly scarce.

Although I disagree with Balog on the use of the "jetons", I must here express my admiration for the labor and scholarship which went into the compilation of the catalogue. I can personally attest to its usefulness, having utilized it in identi-fying, arranging and labeling the American Numismatic Society's collection of Fatimid weights, which now, thanks to Balog's generosity, includes his own collection. The collection of several thousand pieces is now arranged in the same order as Balog's catalogue, and each piece is labeled with the caliph's name, Balog's catalogue number, the weight in grams, and date and place of manufacture (when these latter are stated on the weight). Balog's catalogue provides the basis for all future study of these objects.

In the tenth to twelfth centuries, an area including present-day Algeria, Tunisia, Sicily, Egypt, and Syria came under the rule of the Fatimid dynasty (909–1171), an offshoot of a Shi’i sect from North Africa. The Fatimid rulers traced descent from Muhammad’s daughter Fatima (hence Fatimid) via Isma’il, the seventh Shi’i imam, and thus presented a threat to the political and religious authority of the orthodox Sunni Abbasid caliph. The circular design of the city of al-Mansuriya, one of their first capitals, founded in 947, can be interpreted as a deliberate challenge to the round city of Abbasid Baghdad, the “city of peace” (madinat al-salam). This opposition became more significant following the Fatimid conquest of Egypt in 969. At this time, the Fatimids founded the city of Cairo (al-Qahira, “the triumphant”) and established it as their new capital (973). While Egypt came to enjoy enormous prosperity primarily due to its intermediary role in the lucrative trade between the Mediterranean and India, Cairo soon rivaled the Abbasid capital of Baghdad.

Fatimid dynasty, political and religious dynasty that dominated an empire in North Africa and subsequently in the Middle East from 909 to 1171 ac and tried unsuccessfully to oust the Abbasid caliphs as leaders of the Islamic world. It took its name from Fāṭimah, daughter of the Prophet Muhammad, from whom the Fatimids claimed descent.

Before the Fatimids there had been other rulers in North Africa and Egypt who had succeeded in making themselves virtually independent of the Abbasid caliphs in Baghdad, but they had been Muslims of the Sunni branch of Islam, willing to recognize the token suzerainty of the caliph as head of the Islamic community. The Fatimids, however, were the heads of a rival religious movement—the Ismāʿīlī sect of the Shiʿi branch of Islam—and dedicated to the overthrow of the existing religious and political order in all of Islam. Unlike their predecessors, they refused to offer even nominal recognition to the Abbasid caliphs, whom they rejected as usurpers. They themselves—as Ismāʿīlī imāms (spiritual leaders), descendants of the Prophet through his daughter Fāṭimah and his kinsman ʿAlī—were, in the eyes of their followers, the rightful caliphs, both by descent and by divine choice the custodians of the true faith and the legitimate heads of the universal Islamic state and community. Their purpose was not to establish another regional sovereignty but to supersede the Abbasids and to found a new caliphate in their place.

During the 9th century, Ismāʿīlī missionaries became established in many parts of the Islamic empire, preaching a doctrine of revolution against the Sunni order and the Abbasid state. After a number of unsuccessful risings, the Ismāʿīlīs were able to establish a firm base in Yemen, and from there they sent emissaries to North Africa, where they achieved their greatest success. By 909 they were strong enough for their imām, who had been in hiding, to emerge and proclaim himself caliph, with the messianic title of al-Mahdī (the Divinely Guided One). This marked the beginning of a new state and dynasty.

For the first half-century the Fatimid caliphs ruled only in North Africa and Sicily, where they had to deal with many problems. Most of their subjects were Sunnis of the Mālikī school. Others—a substantial minority—were the Khawārij, or Khārijites. Neither group was well disposed toward the Ismāʿīlī doctrines of the new rulers, and they offered stubborn resistance to them. Even among the Ismāʿīlīs themselves, a conflict soon arose between the state and the revolution—that is, between the caliph al-Mahdī (reigned 909–934) and the missionaries who had brought him to power. There also were political problems with Amazigh (Berber) tribes and neighbouring Muslim rulers, as well as a war against the Byzantines in Sicily and Italy that the Fatimid rulers had inherited from their North African predecessors.

While coping with these difficulties, the Fatimids never lost sight of their ultimate aim, expansion to the east, where the centre of Abbasid strength lay. The first step was the conquest of Egypt. The first caliph, al-Mahdī, established his capital at Mahdiyyah (founded 920) on the east coast of Tunisia. His successors al-Qāʾim (reigned 934–946), al-Manṣūr (reigned 946–953), and al-Muʿizz (reigned 953–975) ruled from there. In 913–915, 919–921, and 925, unsuccessful expeditions were sent against Egypt. Finally, in 969, under the caliph al-Muʿizz, the first stage in the advance to the east was completed. Fatimid troops conquered the Nile valley and advanced across Sinai into Palestine and southern Syria. Near Al-Fusṭāṭ, the old administrative centre of Muslim Egypt, the Fatimids built Cairo, which became the capital of their empire, and in its centre a new mosque and seminary, called Al-Azhar, after Fāṭimah al-Zahrāʾ (the Resplendent), the ancestor of the dynasty.

For more than a century the Fatimid rulers in Cairo pursued their aim of establishing the universal Ismāʿīlī imamate. At times they were compelled by other problems—war on the frontiers, trouble in the Mediterranean, unrest at home or in the provinces—to reach some agreement with their Sunni rivals, but such arrangements were always temporary.

The Fatimid caliphate was a regime at once imperial and revolutionary. At home, the caliph was a sovereign, governing a vast empire and seeking to expand it by normal military and political means. Its heart was Egypt, and its provinces at its peak included North Africa, Sicily, the Red Sea coast of Africa, Syria, Palestine, Yemen, and the Hejaz, with the two holy cities of Mecca and Medina. Control of these was of immense value to a Muslim ruler, conferring great religious prestige and enabling him to exploit the annual pilgrimage to his advantage.