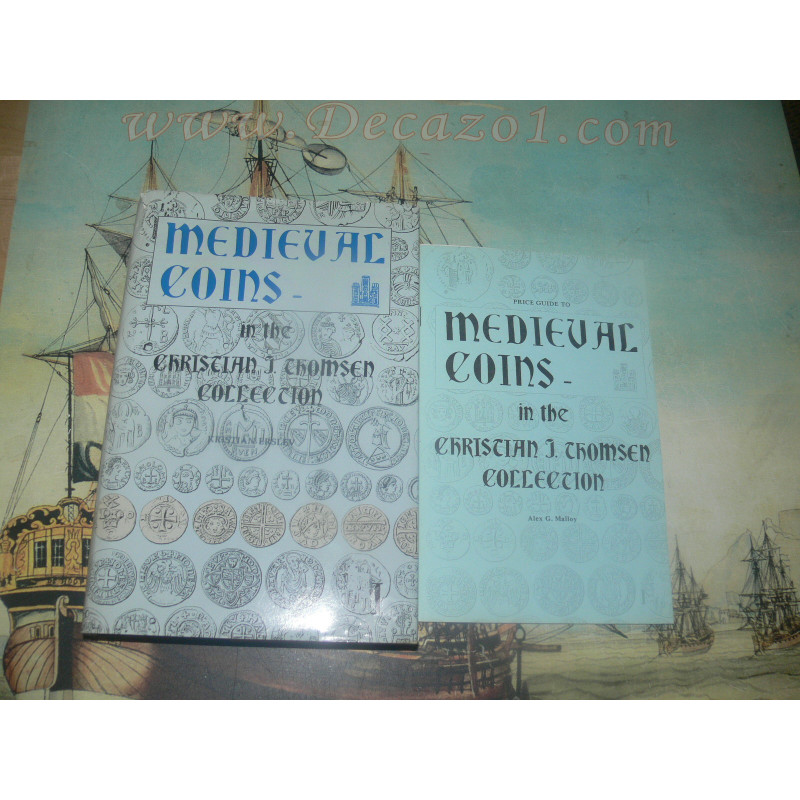 Originally published in Copenhagen in 1873.

Reprint Attic Books Ltd., New York, USA, 1992. Hardcover. 406 pages including 4 plates of line drawings, with 22 new plates of black and white photographs. Translated from French to English and with corrections and amendments by Alan M Stahl and Allen G Berman, and photographs by Alex G Malloy.  An introduction by Jorgen S Jensen.

C J Thomsen was among the most influential numismatic collectors of his time. He amassed one of the largest collections of medieval coins in Europe, if not the world.

The present volume commences with the coinages of the major medieval empires in the east, namely Byzantium (including both centralized Imperial issues and provincial emissions) and Islam.

The next section deals with the early and often problematic coinages of the Dark Ages, ca. 5th-9th centuries. This section on coins of the invading Ostrogoths, Lombards, Vandals and Visigoths, as well as the Merovingian, Carolingian, and Anglo-Saxon series have been considerably updated and sometimes re-attributed with reference to more modern sources.

The third section deals with medieval coinages from the early establishment of the countries that form the basis of modern Europe and follows numismatic developments in these areas to the fifteenth century. The issues of Italy, France, Britain and the Low Countries are extensively treated and organized into secular, ecclesiastical, and civic divisions. This section also contains the coinage of Spain and Portugal, as well as newly updated treatments of Thomsen's Armenian, Serbian, and Crusader coins.

Over 4,100 coins are catalogued in this volume alone, and Thomsen's notes on rarity are also included. The coin illustrations are taken from Thomsen's own coin collection, now in the Royal Danish Museum, Copenhagen. Two bibliographies (the original and modern updatings), an addendum updating the coin attributions, an index to rulers and geographical locations, and a list of Thomsen's coins still in the Royal Collection, together with eight maps have been added to increase the scope and utility of this work for all those interested in medieval coins.

Christian J Thomsen
Born in 1788, the son of a wealthy Copenhagen merchant, Thomsen had no formal university education. Nevertheless, he managed to achieve a high level of self-education. By the time he was twenty-eight, he was named Secretary to the Royal Commission of Antiquities. In 1832 he was appointed assistant-keeper of the Royal Cabinet of Coins, succeeding as its keeper ten years later. Thomsen pioneered modern museum practice by permitting the public viewing of the collections. He reformed and augmented the collections and was known as a great organizer. In his will, he left his impressive collection of medieval coins to the Royal Cabinet under the proviso that it be published.

Kristian S Erslev
As a student aged nineteen, Kristian Erslev was given the task of completing the Thomsen Collection catalogue. By 1876 he had completed and published his work in three volumes, of which this is the first.  He died in 1930.