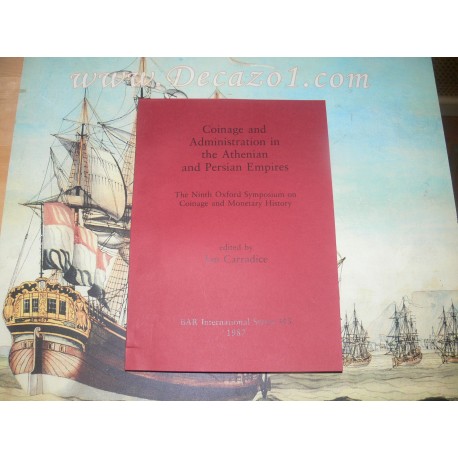 Carradice, Ian: BAR 343. Coinage and Administration in the Athenian and Persian empires

Coinage and administration in the Athenian and Persian empires

The ninth Oxford symposium on coinage and monetary history

The standard work by Ian Carradice and Christopher Tuplin, on the Regal coinage of the Persian Empire (Persian sigloi), which is used as the main reference on this series. Also the Athenian Coinage Decree by Harold B. Mattingly and D. Lewis. But more importantly, it is the only reference that to this date that has been published on probably the greatest of all ancient Greek coin hoards - The Decadrachm Hoard with general and specific papers on this hoard by Sallie Fried, Jon Kagan, Jeffrey Spier and M. Jessop Price. The book is most important and rarely available.

The Achaemenid series began in the mid-late sixth century BC, contemporary with the famous Kroisid coinage, and lasted until the conquest of Persia by Alexander the Great in the 330s BC. The term “daric” dates from the fifth century BC, and was used by the Greeks as a term for Perisan coinage, particularly the gold (see Herodotos 7. 28). Its name derives from that of the Persian king Darios I, under whom the Persian coinage began. Ian Carradice’s study, “The ‘Regal’ Coinage of the Persian Empire” (in Coinage and Administration in the Athenian and Persian Empires. BAR International Series 343. Oxford. 1987) forms the modern basis for our understanding of this interesting coinage.

The Persians did not traditionally use coinage; instead, they employed the age-old systems of barter and trade-in-kind. Their eventual adoption of coinage was related first to their conquests of Lydia and then to their conflicts with the Greek city states in the sixth through fourth centuries BC. During these wars, the Persians employed Greek mercenaries, who, unlike their eastern counterparts, were accustomed to receiving payment in coinage.